GIRLS THEY WRITE SONGS ABOUT by Carlene Bauer 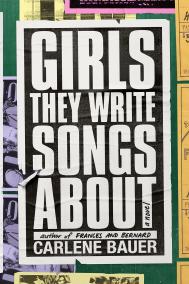 Carlene Bauer’s stellar novel GIRLS THEY WRITE SONGS ABOUT was reviewed in The New Yorker’s Briefly Noted. They write: “This prickly-coy novel centers on two women who move to New York in the nineteen-nineties to become writers—or, as one of them, the narrator, puts it, ‘to be seen as an overpoweringly singular instance of late-twentieth-century womanhood.’ Bauer is a crackerjack chronicler of the slide into humility which follows ravenous early adulthood, when ‘we felt that we owed the books we’d read proof that we were as open and free as they had commanded us to be.’” Farrar, Straus and Giroux published the novel on June 21, 2022.