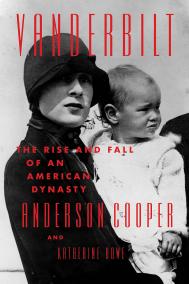 VANDERBILT by Anderson Cooper continues to be a bestseller, appearing for the week of November 7 on The New York Times lists for Hardcover Nonfiction, Combined Print & E-Book Nonfiction, Audio Nonfiction, and Business, as well as The Washington Post’s Hardcover Nonfiction list. The New York Times also featured a Letter to the Editor responding to Cooper’s By the Book interview last month: “Anderson Cooper’s responses showed his deep honesty and vulnerability, and all the sadness he has had in his life... I can think of no one else who has answered that oft-posed question (‘You’re organizing a literary dinner party. Which three writers, dead or alive, do you invite?’) in such a disarming and truthful manner. So moving.” Harper published VANDERBILT on September 21, 2021.