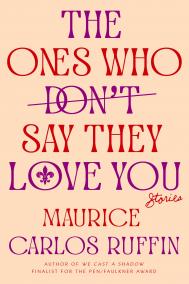 THE ONES WHO DON'T SAY THEY LOVE YOU by Maurice Carlos Ruffin was featured in the AV Club's preview of must-reads for August. The reviewer writes: “Sometimes a story—or any short piece of writing—can get by on the strength of a single scrap of language, be it an unusual description or surprising line of dialogue. In the title short story of Maurice Carlos Ruffin’s debut collection, such a moment comes just after a john approaches a young sex worker on the street and wonders aloud why he’s the only one there. ‘I’m the onliest one you need,’ he hauntingly responds. In THE ONES WHO DON'T SAY THEY LOVE YOU—which follows Ruffin’s novel WE CAST A SHADOW, a finalist for the PEN/Faulkner and the PEN/Open Book Awards—the writer traces the lives of a cast of characters living on the margins in his hometown of New Orleans.” One World publishes the book August 17, 2021.