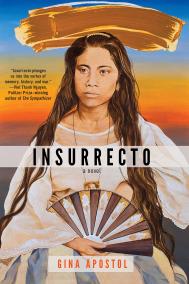 INSURRECTO by Gina Apostol has been named a fiction finalist for the Dayton Literary Peace Prize. Other finalists on the shortlist include THE OVERSTORY by Richard Powers and THERE THERE by Tommy Orange. The winners of the award, which honors the power of literature to promote peace and reconciliation, will be announced September 17, 2019. Soho Press published the book on November 13, 2018.