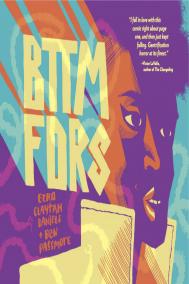 Ezra Claytan Daniels and Ben Passmore were interviewed by NPR and i09 about BTTM FDRS, their graphic novel which confronts the ramifications of gentrification in “comic horror form.” Daniels says to NPR, “A lot of the book is a love letter to my time in my early 20s in Chicago. . . I was moving to neighborhoods that were cheap because that's all I could afford.” Fantagraphics published the book on June 25, 2019.