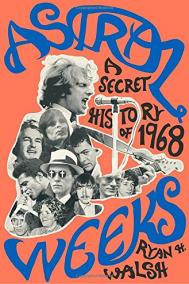 The Ringer published a feature on the 50th anniversary of Van Morrison’s Astral Weeks which heavily drew on and praised Ryan Walsh’s work of history, ASTRAL WEEKS: A SECRET HISTORY OF 1968. “Excellent,” Lindsay Zoladz writes of the book: “Walsh’s book isn’t an analysis of the finished record so much as a conjuring of the atmosphere in which it was dreamed up—an approach that augments the album’s aura rather than draining it of its magic.” Penguin Press published the book on March 6, 2018.