OUR AMERICAN FRIEND by Anna Pitoniak 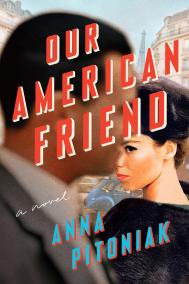 OUR AMERICAN FRIEND by Anna Pitoniak received a flurry of critical acclaim following its publication last week. In a starred review from Booklist, reviewer Stephanie Turza writes: “Pitoniak has glazed current events with an intriguing veneer of fiction…[She] skillfully drives the pace of the novel forward in multiple time lines, letting characters emerge and recede…Exploring interpersonal loyalties and the difference between cowardice and patience, the well-researched and twist-FILLED OUR AMERICAN FRIEND is a natural next-read for fans of Curtis Sittenfeld, A. Natasha Joukovsky, and Stacey Swann.” The book also received a glowing review from Justine Harman for The New York Times: “From its very first sentence, [OUR AMERICAN FRIEND] wastes no time hitting a dramatic note…[Pitoniak] skilfully nests each Russian doll inside the next, keeping each chapter of the story intact as she builds a new one around it. The result is an elegant and well paced ‘thriller’…Like EMILY IN PARIS meets SCANDAL — fantastic fun.” The Christian Science Monitor placed the novel at #3 on its list of “Tales of Courage and Grit Lead the 10 Books of February.” Lastly, Pitoniak appeared on MSNBC to discuss the real-life world events that inspired the novel. Simon & Schuster published the novel on February 15, 2022.