THE SWANK HOTEL by Lucy Corin 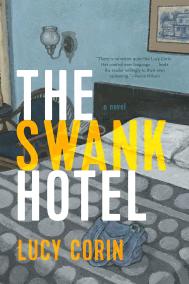 Lucy Corin's THE SWANK HOTEL received a rave review from The Millions. They write: “[I]f Corin’s early books are high-concept experiments (or collections of high-concept experiments) that transcend their concepts, her latest, THE SWANK HOTEL is—in scope, formal ambition, and linguistic sorcery—something else entirely…It’s monumental in the way of fractals: inward looking, but infinite. And in addition to being a scathing, often hilarious critique of consumerism, SWANK might also be the most precise and illuminating novel about psychosis and (attempted) suicide since Mrs. Dalloway…Corin toggles amongst psyches with Woolfian delicacy, complexity, and dexterity.” Graywolf Press published the novel on October 5, 2021.