FREEDOM FROM THE MARKET by Mike Konczal 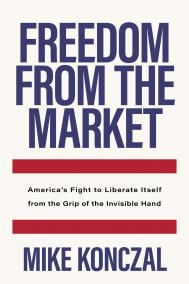 Jamelle Bouie invokes Mike Konczal’s FREEDOM FROM THE MARKET in his latest Op-Ed for the New York Times, “Joe Manchin Doesn’t Like What Joe Biden is Doing.” He writes: “Animating the New Deal, Mike Konczal writes in his book, FREEDOM FROM THE MARKET...was a 'new idea of freedom that limited and constrained markets' and put limits on ‘market dependency’… Konczal quotes a Roosevelt administration official, the great labor lawyer Donald Richberg, who made this point in explicit terms when he said that when workers are ‘compelled by necessity to live in one kind of place and to work for one kind of employer, with no choice except to pay the rent demanded and to accept the wages offered — or else to starve — then the liberty of the property owner contains the power to enslave the worker. And that sort of liberty is intolerable and cannot be preserved by a democratic government.’” The New Press published the book on January 12, 2021.