THE FINAL REVIVAL OF OPAL & NEV by Dawnie Walton 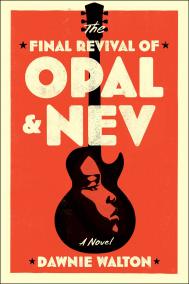 Praise continues to build for Dawnie Walton’s THE FINAL REVIVAL OF OPAL & NEV, which will publish later this month. The novel has been named a Book of the Month pick for March, hailed as "[a]n unforgettable, exciting, special debut.” O, The Oprah Magazine features the novel on its list of “20 of the Best Books to Pick Up This March,” praising: "Walton’s fabulous debut novel, which takes the form of an oral history, is an utterly fresh take on finding one’s voice, on systemic racism and sexism, and on freedom of expression. That these heavy subjects don’t weigh down this hugely entertaining novel are testament to Walton’s deftness and skill." The book is also featured on March most-anticipated lists from Pop Sugar, Entertainment Weekly, and BookRiot, and Essence magazine lists Walton on its "The Power of the Pivot" profile of women who left successful careers to pursue their creative endeavors. 37 Ink Books will publish the book on March 30, 2021.