VIA NEGATIVA by Daniel Hornsby 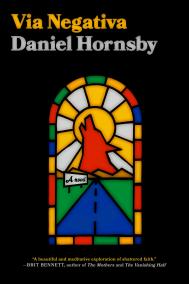 Booklist calls Daniel Hornsby’s VIA NEGATIVA “a beautifully crafted story of a man reflecting on his life and his moments of inaction . . . a striking debut that forces readers to consider what holds us back from action.” Sam Sacks of the Wall Street Journal praised the novel’s “stripped-back, sturdy prose” and how “subtly and movingly, the novel teases out the relationship between loneliness and godliness.” The book was also highlighted in The New York Times’ New and Noteworthy as “a promising, energetic debut,” and in The New Yorker’s Briefly Noted, which praised it as a “novel of troubled faith and unlikely connection.” Knopf published the book on August 11, 2020.