THE LOST BOOK OF ADANA MOREAU by Michael Zapata 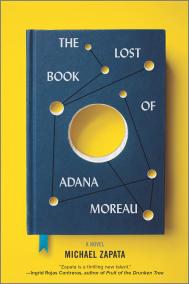 Michael Zapata spoke with NOLA.com about the “gut punch disappointment” he felt following the cancellation of his book tour stop in New Orleans, which is where he lived, taught, and wrote for many years. The “unreal Shakespearean city” provided inspiration for his debut novel, THE LOST BOOK OF ADANA MOREAU, a time- and genre-defying story about a 1920s Dominican sci-fi writer whose lost manuscript finds its way, decades later, into the hands of a Jewish-Italian hotel clerk in Chicago. Hanover Square Press published the book on February 4, 2020.