THE PIONEERS by David McCullough 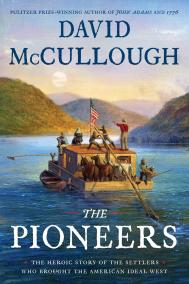 David McCullough’s THE PIONEERS debuts at #1 on the New York Times Bestseller Hardcover Nonfiction List on Sunday, May 26, 2019. In addition, McCullough was interviewed by the Wall Street Journal which says, “[McCullough] has chosen to shine a lantern into the underappreciated corners of American history....'The Pioneers' is the account not just of one Ohio settlement but of myriad such places across America, where innumerable immigrants (as the settlers were known) came to make a fresh start in a strange land. It is a story as resonant today as ever." The book also received rave reviews in Publisher’s Weekly, which says “Popular historian McCullough uses his well-crafted writing style and thorough research to highlight the evolution of the ‘Ohio territory’... The swiftly moving narrative also shines light on the territory’s consistent antislavery position beginning with the 1787 Northwest Territory Ordinance and leading to the first black vote in 1802…a fascinating and well-written look at the Cutler families and the Americanizing of Ohio” and the Missourian which says "'The Pioneers' is an engaging, educational read about a key, but often overlooked, time in America’s history." Simon & Schuster published the book on May 7, 2019.