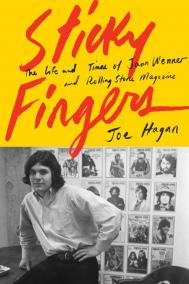 Two of the New York Times daily book critics, Dwight Garner & Janet Maslin named Joe Hagan’s biography of Jann Wenner one of the Best Books of 2017. Dwight Garner writes “Hagan has delivered a graceful, confident, dispassionately reported and deeply well-written biography. It’s a big book, one that no one will wish longer, but its chapters move past like a crunching collection of singles and not a thumb-sucking double album. It’s a joy to read and feels built to last.”

Janet Maslin says “A great read, mixing wall-to-wall dish with long-view acuity. This is the book I gave to friends most often this year.” Knopf published the book on October 24, 2017.