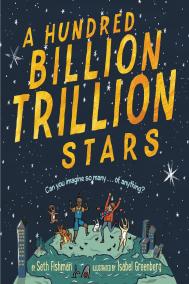 The Horn Book has included A HUNDRED BILLION TRILLION STARS in its 2017 Fanfare roundup and gave it a starred review. Horn said of the book that it “beautifully succeeds in its mission to convey to young readers the vastness of the numbers in our midst while reassuring them that, although each of us is one of billions of people roaming the earth today, ‘there’s only one of YOU.’" Greenwillow Books published the picture book on October 3, 2017.