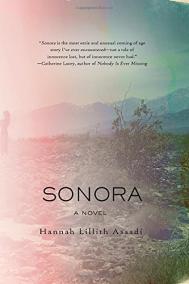 Hannah Lillith Assadi’s SONORA was written up in the New Yorker’s Briefly Noted section, with the editor’s endorsement: “it powerfully evokes the sense of being an outsider.” The book has also been selected as Bustle’s American Woman Book Club pick for April, which called it “a poetic coming-of-age story about friendship, identity, secrets, and obsession that will haunt you long after you turn the final page." Soho Press published the book March 28, 2017.