THE GOD WAVE by Patrick Hemstreet 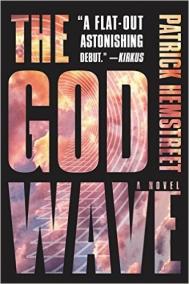 Patrick Hemstreet’s sci-tech debut, THE GOD WAVE, has received a volley of advanced praise. Kirkus deemed it “a flat-out astonishing debut” and gave it a starred review, while Publisher’s Weekly says THE GOD WAVE is “a tense tale of cutting-edge SF… Hemstreet imbues his sprawling cast with depth and character...”

THE GOD WAVE is the first in a trilogy by novelist and neuroengineer, Patrick Hemstreet, and follows a team of neuroscientists who uncover amazing and new capabilities in the brain that steer human evolution toward miraculous and deadly frontiers. THE GOD WAVE will be published in hardcover by Harper Voyager on May 17, 2016. Please visit the following links for more information: