STORY OF YOUR LIFE by Ted Chiang 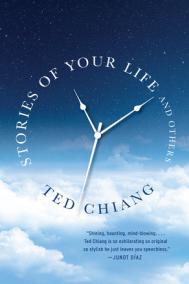 The film adaptation of the Nebula award winning story by Ted Chiang is scheduled to be released on November 11, 2016. The film called ARRIVAL is directed by Denis Villenuve (SICARIO & PRISONERS) and stars Amy Adams & Jeremy Renner. Vintage Books reissue of STORIES OF YOUR LIFE and OTHERS was published on June 14, 2016.