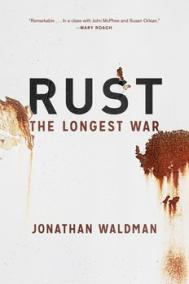 An excerpt from Jonathan Waldman’s, RUST: THE LONGEST WAR was published in Men’s Journal from his book RUST: The Longest War. The book was also reviewed in the Wall Street Journal which called it “Compelling” and also said “Mr. Waldman does a masterful job of interweaving elements of the science and technology…” Simon & Schuster published the hardcover on March 10, 2015.