THE HOT ZONE by Richard Preston 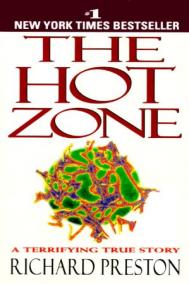 Richard Preston was interviewed by The New York Times regarding the return of his 1994 book about the Ebola virus to the bestseller list. He also published an article called “The Ebola Wars” in the October 27th issue of The New Yorker about efforts to contain the outbreak. It was also announced that THE HOT ZONE was being turned into a limited TV series by Fox TV studios. The series is to be produced by Lynda Obst & Ridley Scott.